Skip to contentSkip to navigation

Media Monitor is Canada's leading database for news stories on the broadcasting system, media ownership and cultural policies in Canada. The purpose of this database is to collect and preserve news stories relating to these issues, without modification, so that the public may, without cost, access the database for the purposes of scholarship, research, private study and related purposes.

One example of fair dealing is downloading a single copy of an article or part of an article for your own research or private study. The materials on this database are protected by the Canadian Copyright Act, and apart from the exercise of fair user rights, no unauthorized use or reproduction is permitted without the consent of the copyright owners. If you are willing to restrict your use of this database to the uses permitted by the Canadian Copyright Act, then please click Accept below.

CBC TV has an audience crisis, according to the most recent data released by CBC. CBC is required by the government to report on its financial and audience performance on a quarterly basis. Quarterly reporting began in 2011-12. Reports are issued for the first three quarters of the year and the annual report presents results for the full year.

To its credit CBC is revealing more information about its performance than it has in recent years. Once upon a time CBC was transparent about its finances and its audiences but competition today has meant smaller audiences, at least in TV, and there has been less for the Corporation to boast about and more to be defensive about.

The metrics CBC uses to measure performance run the gamut from content percentages to revenues obtained from advertising and other sources. To measure audience performance CBC uses audience ‘share’, ‘listening/viewing hours’, ‘average minute audience’, ‘subscriber counts’, ‘unique visitors’ and opinion scores. One needs to be an expert in audience measurement to work their way through this maze of information. I doubt that many CBC Board members or senior managers understand or could explain it all.

Moreover, the measures are not applied uniformly across all CBC services. The main TV services are measured by share, the smaller specialty TV channels by subscriber counts (not an audience measure), radio morning shows and supper hour TV programs by weekly listening/viewing hours, the web sites by monthly visitors, etc. English and French services also differ in the metrics used for similar services.

CBC, again to its credit, attempts to measure public reaction to its services rather than rely strictly on measures of audience size or ratings. Ratings data are provided by independent third-party ratings organizations but to measure public reaction CBC commissions its own surveys. This, of course, means the surveys could be perceived as biased. Little information is provided about these custom surveys. We are assured that the sample of respondents results in “a very small margin of error.” Survey results are provided in each quarterly report as shown in the table below, showing the agreement scores (out of 10) for various traits of CBC radio and TV as a whole:

In the quarterly reports differences in the opinion scores of .1, .2 or .3 in these or similar traits are described as indicating a trend. For example the 2011-12 third quarter report claims: “Results…suggest that Anglophones are responding positively to the initiatives that have been announced or introduced since the launch of Strategy 2015. Scores for each aspect of the guiding principles were higher in November 2011 than in November 2010.”

But these small differences in the scores, some of which turned negative by the third quarter of 2012-13 as shown above, are probably not statistically significant. More importantly, is this the correct way to measure public reaction to CBC services? Asking Canadians whether CBC radio, TV and web services as a whole are informative, enlightening or entertaining is almost certainly going to elicit a positive average score. Survey researchers know this. CBC offers many services and some people will be answering for CBC radio, some for CBC TV, some for CBC News Network, some for their favourite CBC shows or personalities or cbc.ca, etc. Besides, ask the same question of CTV or TVA and you will probably receive similar scores. So what is the purpose of asking questions that fail to capture year-to-year changes and that do not differentiate between CBC services or other broadcasters? CBC needs to rethink how it measures public reaction.

The various measures of audience size used by CBC are shown in the table below, taken from the most recent quarterly report for 2012-13: 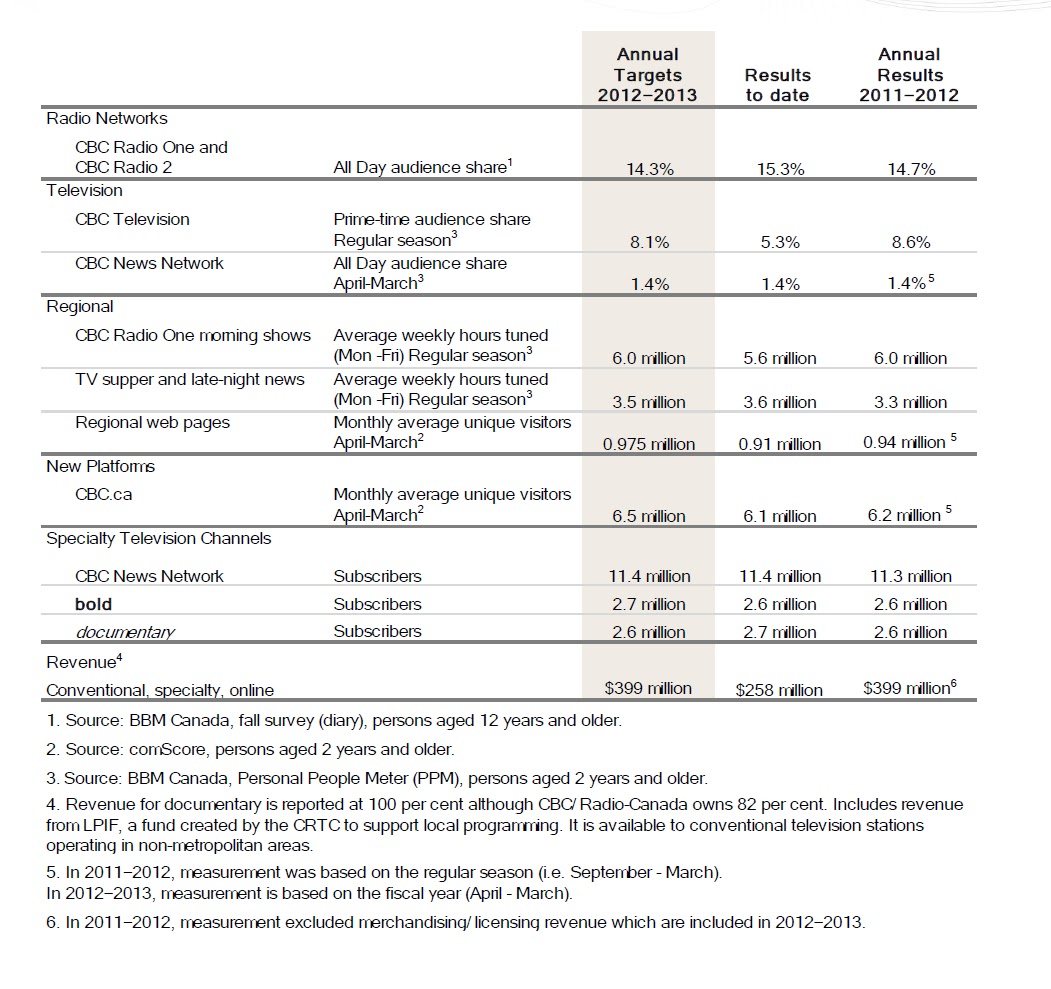 To measure the size of the audience of cbc.ca, a third-party estimate of unique monthly visitors is used. The most recent number is 6.1 million monthly visitors, slightly below the target of 6.5 million visitors. Previous quarterly reports broke down this number to distinguish between CBC online news, sports and entertainment but this was for some reason “discontinued.” The monthly visitor or reach number seems impressive at first glance but if one were to compare this to other web sites, it would become apparent that hundreds of sites generate a large audience reach over the course of a month. To be counted one need only visit a site for as little as a few minutes in a month. A more telling number would be the audience share of time spent browsing the internet. However, because the net has thousands of web sites all competing for audience, cbc.ca has a small share of browsing time, not something web sites want to divulge.

To measure the size of the CBC radio audience, a third-party estimate of audience share is employed. The most recent share for CBC radio is reported as 15.3%, a full share point ahead of the target for the year. CBC radio, despite internal and external budget cuts remains strong. Unfortunately, Radio 1 and Radio 2 are not broken out separately, so we don’t know if one is trending higher and the other lower.

Without explanation, CBC employs a different audience metric for Radio 1 morning shows, reverting to weekly listening hours. Since share is simply the percentage of listening hours of CBC compared to time listening to all radio stations, it would be simpler to use share here as well. CBC French radio in the same report uses share. However, millions of hours sounds more impressive. The silver lining: listening hours allows one to compare to the viewing hours of CBC TV’s supper hour programs, which, interesting, are only half the size of the radio morning shows. (Note to CBC researchers: the footnote sourcing the radio listening hours is incorrect.)

The metric that shows the most change in the latest quarterly report is the audience share of CBC TV.

The prime time share of CBC TV is reported as 5.3% at the mid-point of the TV season. This is a loss of over 40% compared to the 9.3% share in 2010-11. The report comments on this decline: “For CBC Television, reduced programming as a result of the funding decreases announced in Federal Budget 2012, the absence of professional hockey due to the NHL labour disruption and the phasing-out of the LPIF contributions had significant programming and revenue implications on our conventional and digital platforms. CBC Television’s share performance fell from the prior year’s results and is trending below target.” Not mentioned is that 2012-13 also marked the first year without U.S. game shows in the CBC’s prime time schedule, which, combined with NHL hockey, served to cover up weaknesses. With the return of the NHL mid-season and some extra games added to the schedule, CBC’s share would recover somewhat but at best would be 2 share points or 20% lower than two years ago.

The first and presumably most important factor used to explain CBC TV audience losses, cuts in the federal funding, also affected other CBC services but they managed to exceed or come close to targets. Worth noting: CBC radio’s share is now three times larger than the audience share of CBC TV.

If the share of CBC TV was just over 5% in prime time, it is below 5% on a 24 hour basis; CBC daytime schedules have traditionally performed poorly compared to CBC’s prime time. Making matters worse is that the audience to about half the U.S. TV stations available in Canada are no longer being measured by the ratings company and neither are services such as Netflix or Apple TV, meaning that CBC’s share of all TV viewing is actually lower than the numbers suggest. This is the lowest audience share in CBC’s history and yet there is no hint of the severity of the TV network’s situation in the quarterly report. CBC TV audiences are sold to advertisers and with less audience to sell, 2012-13 revenues, shown in the table above, are almost $40 million less than at the same point the previous year, creating a revenue shortfall that, when added to federal cuts, may be crippling.

There has been some public debate about whether or not CBC is in crisis. The CBC’s latest report confirms that many programs on the main TV service, despite efforts to be more “popular,” have fallen to audience levels not much greater than many specialty channels. Those who deny the crisis fail to realize that Canadians prefer Duck Dynasty to most CBC shows, including the national news. The most important and costly CBC service has an audience crisis and CBC needs to respond to it. Is it time to rethink the role of CBC TV?

In this article →
Join our movement

Stand with us in the defense of Canada's cultural and economic interests.
Join our movement
Up Next
Labrador by-election radio ads
News